Jurisdictions next had to identify the data source(s) from which potential outcome and indicator variables were available. Key considerations were the timeliness of the data source, what geographic level of information is available, and whether a data use agreement is needed to obtain the needed data. An example data dictionary for data sources useful for the opioid-related vulnerability assessment is available, which includes information about the general availability of data sources, indicators creatable from those data sources, strengths, and weaknesses. Since many data sources are collected and maintained at the state and local levels, specific availability may vary. Health departments are encouraged to weigh the usefulness of indicators in predicting opioid-related outbreak vulnerability, ease of collection, and the needs of program partners when choosing indicators to collect.

Once the individual variables are collected, it is helpful to compile into a single analytic dataset. Data exploration, including descriptive geospatial analysis, can be done to gain a better understanding of the data such as data completeness, extent of ‘zero’ values, distribution, and preliminary geographic variability. While there are many software options that can support data exploration and mapping, the technical assistance team highlighted Microsoft Power BI [3] and R [4]. Power BI offers ease of use for data exploration and interactive dashboards. Power BI Desktop is free for analysts to use; however, a license is needed to use Power BI Pro for collaboration. Dashboards and reports may be uploaded to the public web using the free version of Power BI, but sharing interactive dashboards privately requires licensing. R is a strong package for complex programming tasks and publication-quality graphics, and has the advantage of being open source and free to use for any purpose. Due to R’s statistical underpinnings, it is capable of doing advanced analysis, such as Poisson and Negative Binomial regression or complex spatial correlation.

Once data quality is assessed for each variable, analysts can use Power BI to explore data. Power BI is heavily reliant on slicers, which allow users to subset data. Figure 1 provides an example of drug overdose death rates to illustrate these mapping and slicer features, denoted by the blue arrow. Similar exploration can be performed for any of the 50 states and District of Columbia, using the slicer on the right. 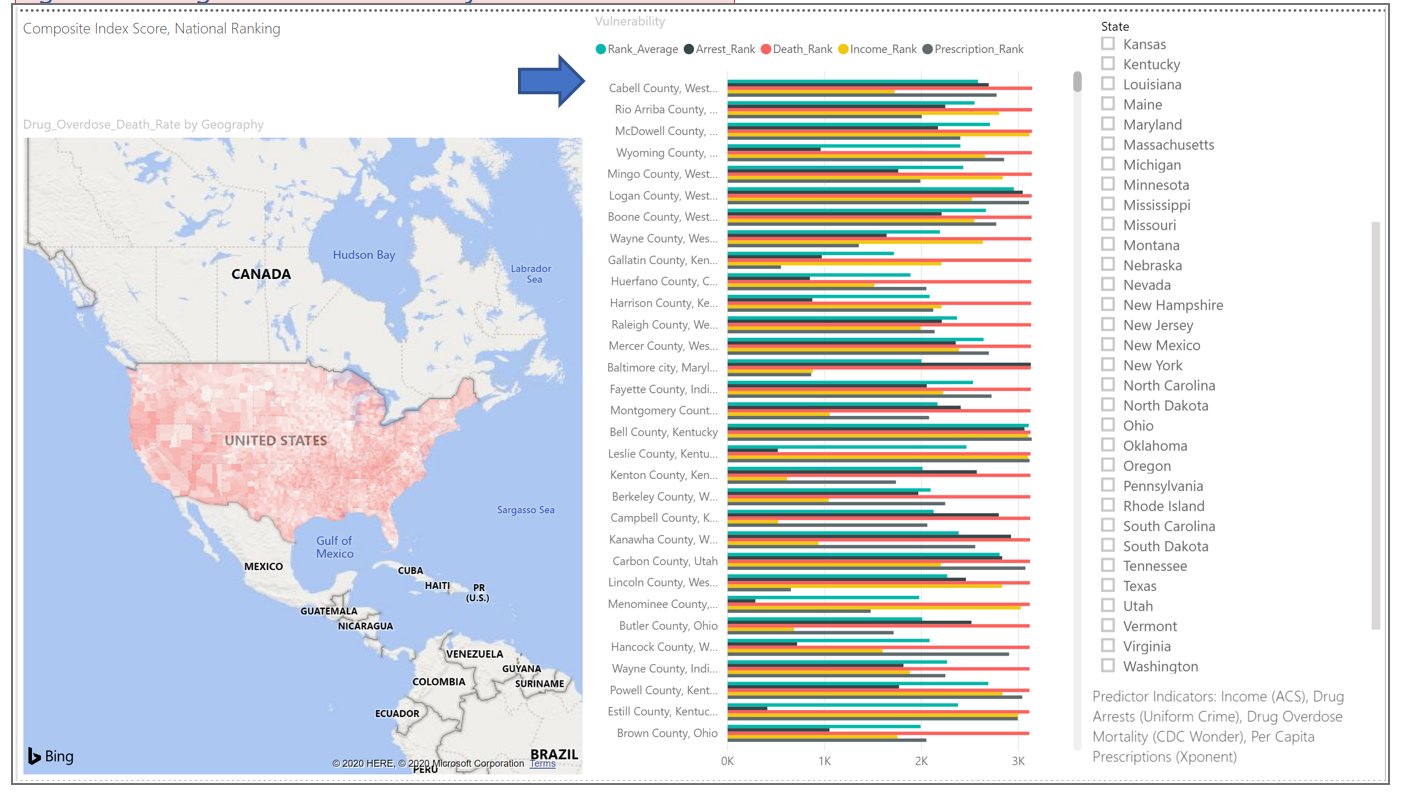 This illustrative dashboard can be used to examine all 3,412 counties and county equivalents in the United States, using the indicators in Table 1 of the Indicator Identification section. This enables analysts to look at specific indicator values and identify counties of interest.

Two programs in R Studio are available as resources for data collection and exploration [4]. The Data Wrangling program is a sequence of read and merge routines that bring in many datasets and create a single file with the indicators from Table 1. The Buprenorphine program can be used to read in, clean, and sum the provider level buprenorphine waivers from the SAMHSA website into a county level summary.

A county-level dashboard including both values and ranks for each indicator allows analysts to identify the overlapping risk factors that may affect a community’s vulnerability for opioid overdose and/or bloodborne infections from unsterile IDU. In this case, counties are sorted by drug overdose death rates; Cabell County, West Virginia is ranked first with the highest value for drug overdose death rate (89.8 per 100,000). With this view, analysts can see how counties with higher values for drug overdose death rate compare for other indicators. For example, Cabell County also has a high prescription drug rate (106.8 per 100 population; ranked 2,775th) and a high drug-related arrest rate (68.87; ranked 2,694th). When setting up the dashboard, it helps to rank all indicators in a “higher is worse” manner, in order to simplify comparison. 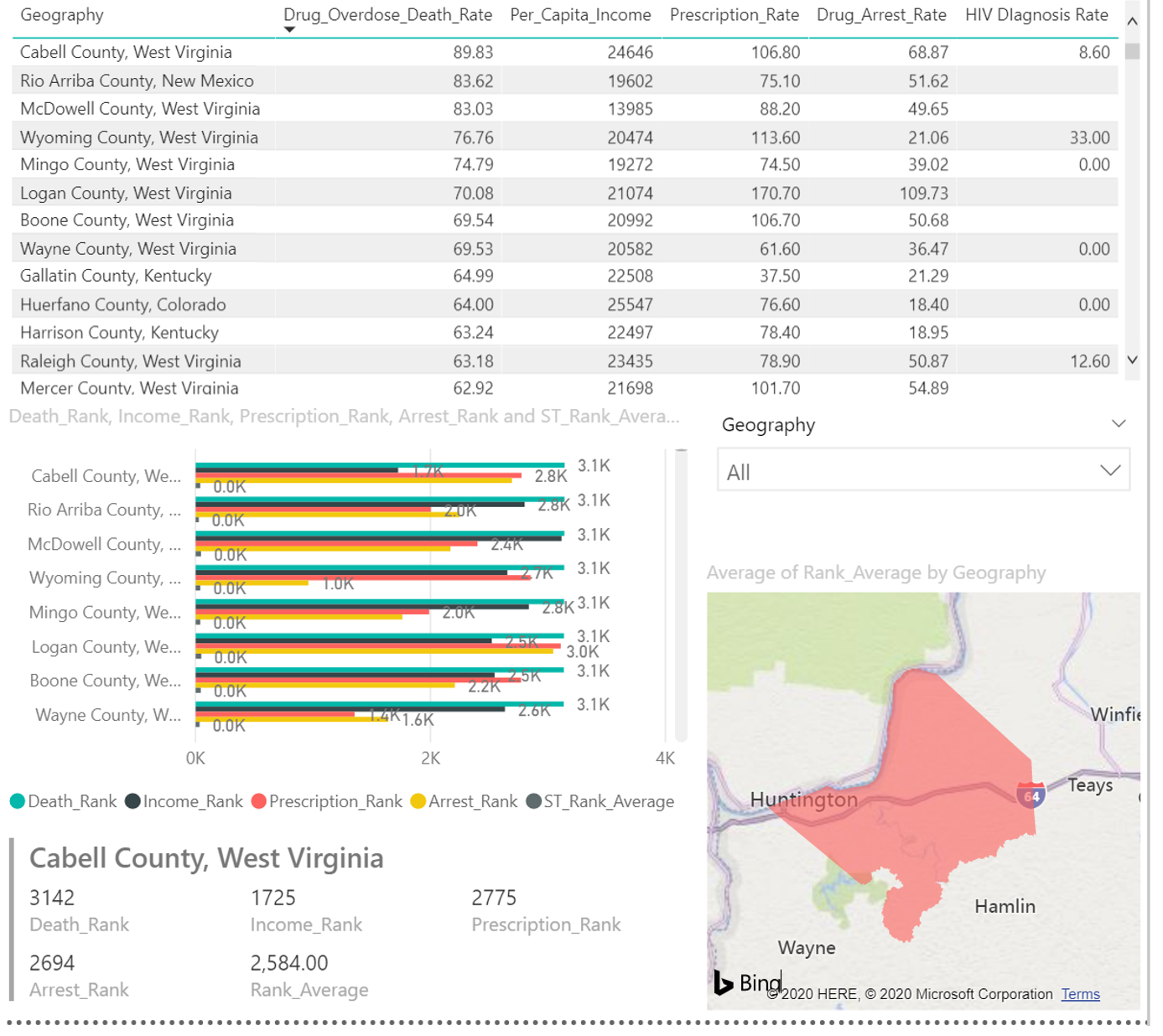 This county level indicator dashboard brings together overdose death rates, and a slicer feature showing indicator ranks along with map denoting geography on one screen.

Sharable maps can then be produced using R. Maps are available as high resolution PDF files of the following core indicators at the county level: drug arrests, per capita income, overdose deaths, opioid prescriptions, unemployment, and buprenorphine prescription capacity by waiver. When producing sharable maps, each map should include variable label, data source, an appropriate legend, and a north arrow. For some states, the legend may need to be manually placed due to layout requirements. 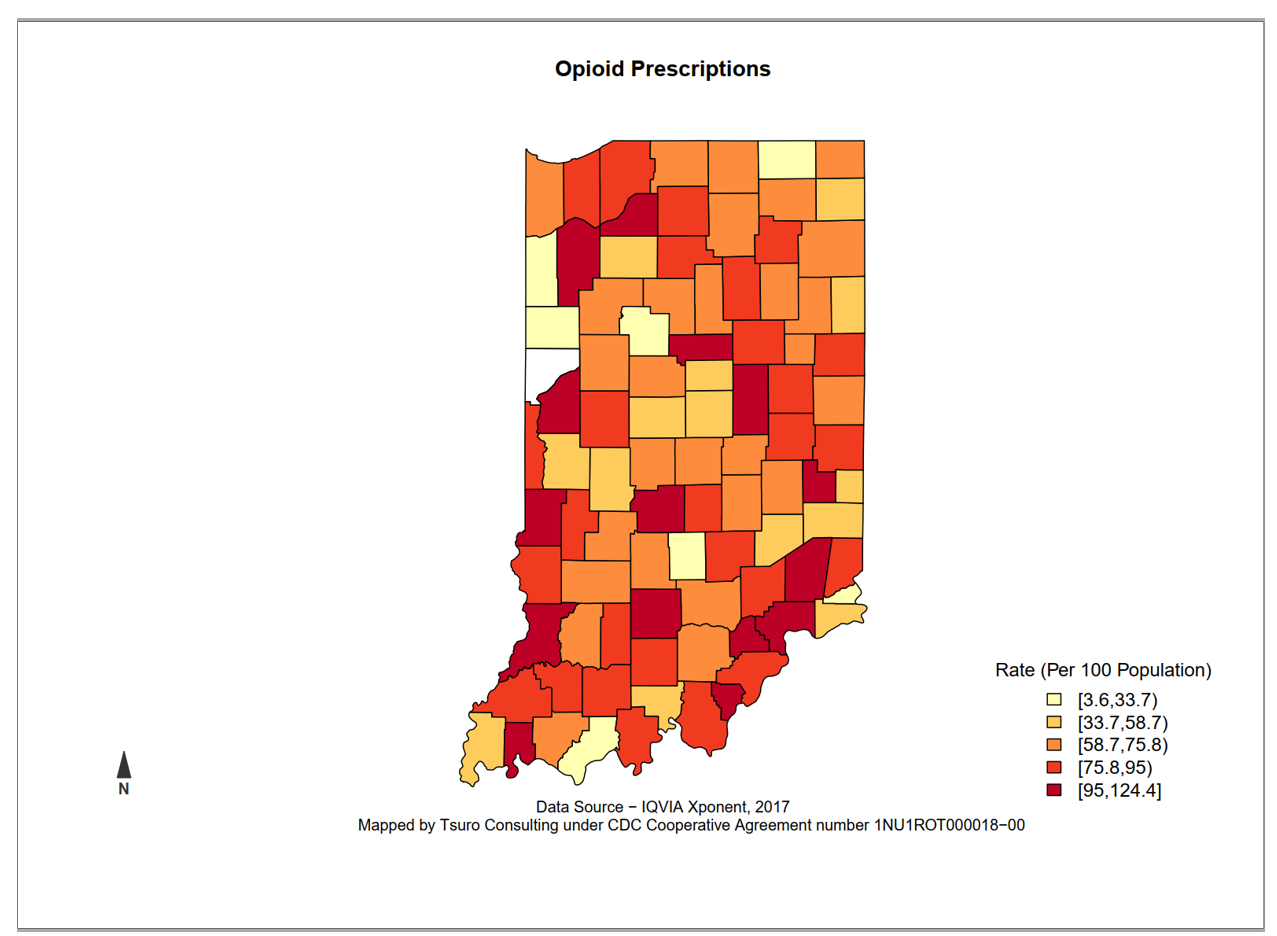 When determining how to categorize an indicator, quantile breaks and Jenks natural breaks are two common approaches. Although quantile categories may be more familiar to some audiences, this method assumes that the underlying distribution of the variable is symmetric. Therefore, the Jenks natural breaks algorithm with five classes may be more appropriate for many of the indicators used in these assessments.

Two programs in R Studio are available as resources [4]. Both State_Heatmaps.R and National_Heatmaps.R have code to create a series of choropleth maps for the indicators in Table 1. Users can use these programs as a starting point for mapping and analyzing new indicators, with the advantage that R can do any necessary analyses.

In planning their approach to the assessment, Michigan followed the model set by Van Handel et al. in 2016. Michigan had been thinking about the opioid issue for many months following the publication of CDC’s national vulnerability assessment, before the funding opportunity was available. They had already compiled their county-level data as part of their approach to selecting areas for setting up syringe services programs. As part of that work, they had also already formed about eight stakeholder groups for the purpose of obtaining data on the needs for these programs. These stakeholder groups, which included surveillance program staff, epidemiologists, and vital record epidemiologists, were leveraged to advise on statistical approaches and data elements to include for the vulnerability assessment.

In planning their approach to the assessment, Michigan followed the model set by Van Handel et al. in 2016. Michigan had been thinking about the opioid issue for many months following the publication of CDC’s national vulnerability assessment, before the funding opportunity was available. They had already compiled their county-level data as part of their approach to selecting areas for setting up syringe services programs. As part of that work, they had also already formed about eight stakeholder groups for the purpose of obtaining data on the needs for these programs. These stakeholder groups, which included surveillance program staff, epidemiologists, and vital record epidemiologists, were leveraged to advise on statistical approaches and data elements to include for the vulnerability assessment.

In approaching their data collection, Michigan took a number of things into consideration. They decided that to be considered for inclusion in the model, the data needed to be relatively recent; available at the county-level without a lot of null values; and be publicly available or already being collected by the state. Preferential consideration was given to data that were normalized to the extent possible (expressed as rate per 100,000 or as a proportion of the population), rather than raw numbers.

Michigan initially cast a wide net, identifying 93 county-level variables known or plausibly associated with injection drug use to examine for inclusion in the model, and in the end, 21 of those met their inclusion criteria. They decided to use all HCV diagnoses (acute and chronic) in those under 30 years as an outcome measure as they knew that for 90% of those individuals, drug use was reported. They also used the rate of accidental death by drug poisoning as an outcome variable. With the fatal drug poisoning model there is a high level of variability in ICD-10 coding and in drug name implicated. This variability can be seen by county and is attributed to variations in the medical examiners’ coding practices. Due to this variability, they decided to use any drug overdose or poisoning and not just those attributed to opioids.

Their independent variables included proportion without a vehicle; proportion without college education; proportion of non-family households; heroin treatment admissions per 100,000; neonatal abstinence syndrome cases per 100,000 births; and sexually transmitted infections per 100,000. When doing their initial modeling, Michigan used a the rural-urban continuum as an independent variable, but found that the results did not mirror the reality in the state, due to the large number of rural counties compared to urban. Ultimately, after receiving technical assistance related to this issue, they adjusted their analysis to include a SAS PROC PLM command to predict the expected outcome as a post-fit analysis. This was found to be an effective adjustment, and rendered results more in line with the reality they were seeing in the state.

Factors associated with the two outcomes of interest (HCV infection and fatal drug poisoning) were each modeled using negative binomial regression, and model-estimated rates for HCV infections and fatal drug poisonings were individually considered as proxies for vulnerability. The estimated rates were ranked from lowest to highest, with the highest rankings indicating considerable vulnerability.

To further explore these data when questions emerged related to the model’s output (county vulnerability rankings), they developed maps of significant variables to see how they looked with respect to the output. If a variable was felt to be important, but variance was large or there were a lot of null values, they would sometimes decide to combine the data across multiple years. They used these maps and other data visualizations to make sure the data was sensical, using natural breaks or quartiles to examine the county-specific data. While quartiles are easy to understand, the natural breaks helped to quantify the magnitude of difference between data points. For example, when one county fell in quartile 1 and another in quartile 2, but the magnitude of difference between the two was very small, the natural break allowed for that difference to be put in the appropriate context.