The first main approach was the Composite Index Score (CIS) that uses methods similar to those developed for the Social Vulnerability Index (SVI) by the Geospatial Research, Analysis, and Services Program (GRASP). The SVI assesses the vulnerability of communities to disasters, such as earthquakes, hurricanes, and floods by ranking each census tract on fifteen factors and grouping them into four related themes. Each census tract receives a separate ranking for each of the four themes, as well as an overall ranking. The mechanics behind the CIS are similar. For this assessment, however, indicators relate to vulnerability, opioid overdose and/or to non-sterile IDU and are selected by subject matters experts. The rankings from the CIS then represent an indirect method of assessing risk for counties. An illustrative example is provided using a subset of the indicators identified in the National Vulnerability Assessment [1]: opioid prescriptions, drug arrests, drug overdose deaths, and per capita income. Similar to the SVI, if multiple variables on the same topic area are included, consider separate ranks for each topic or weighting the overall rank to account for the number of variables by topic area.

CIS uses the rankings of indicators within each jurisdiction to assess which counties (or other subdivisions) are most vulnerable to opioid overdoses and/or infections from non-sterile IDU. This method is less statistical than regression approaches which have more robust modeling and predictive power, but is very adaptable and works well in applied situations.

For this example, we used the following category/indicator pairs, based on publicly available data:

To handle missing data and zeros, we made the following assumptions. We assumed that zero values were a legitimate reflection of zero events and assigned the nationwide median for missing (N/A) values, as a simple form of imputation. Assumptions regarding zero values and imputation methods could be adjusted based on local context and comfort with other imputation methods.

We ranked each indicator among the 3,412 counties and county equivalents, with a “higher is worse” categorization (see Table 2). We then took the average of the four ranks to calculate the overall CIS rank for each county. Analysis was performed using widely available spreadsheet software (Microsoft Excel).

Figure 4 presents a map of the overall CIS rank from this illustrative example by county using Microsoft Power BI. Specific counties can then be further explored to understand the underlying factors contributing to their overall CIS rank as well as the different preventive services and interventions available in the community. 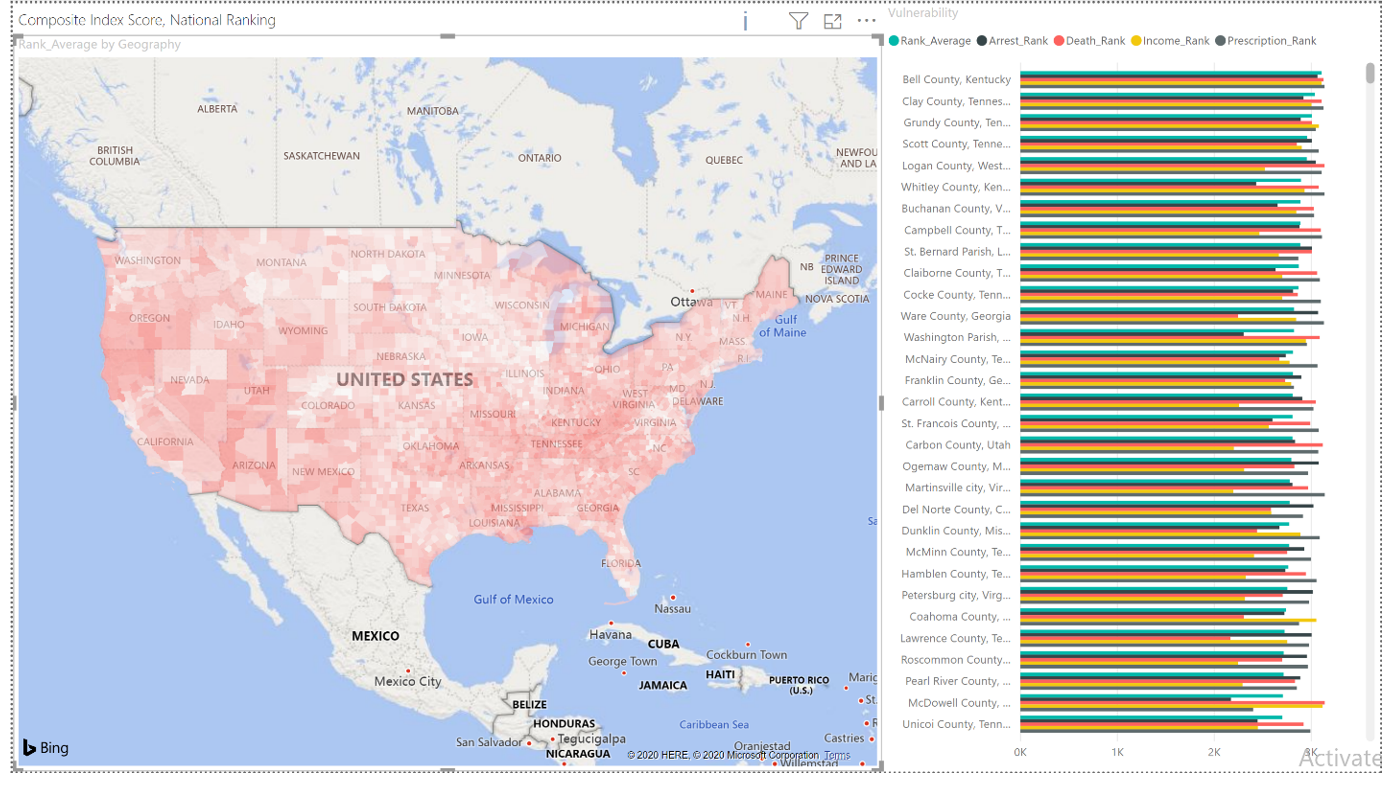 When interpreting the overall CIS rank, it may be helpful to compare it with an appropriate outcome metric for context. Jurisdictions who used the CIS approach often included or compared their CIS ranks with diagnosis data for HCV or HIV or administrative claims data for endocarditis, HCV or HIV.

When doing this type of contextual comparison, we offer the following considerations:

Missouri’s Opioid 2019 JVA project focused on the development and communication of an approach similar to the Social Vulnerability Index (SVI) by aggregating multiple factors related to opioid-related disease risk and relating this risk across a geography that includes 114 counties (115 when including the independent city of St. Louis). The primary intent of Missouri’s selected approach was to manage time and to offer simplicity in communication with the public. Overall, the results were a success and the methodology they employed seemed to be more transparent and easier to share. 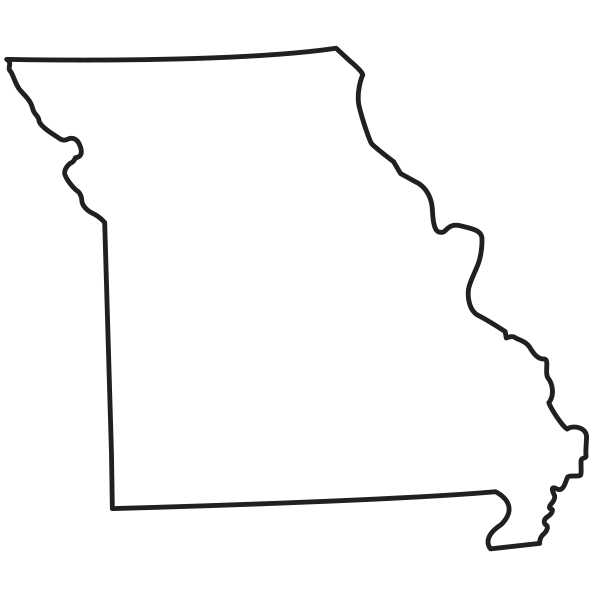 Missouri’s Opioid 2019 JVA project focused on the development and communication of an approach similar to the Social Vulnerability Index (SVI) by aggregating multiple factors related to opioid-related disease risk and relating this risk across a geography that includes 114 counties (115 when including the independent city of St. Louis). The primary intent of Missouri’s selected approach was to manage time and to offer simplicity in communication with the public. Overall, the results were a success and the methodology they employed seemed to be more transparent and easier to share.

The team applied a rank sum methodology by individually ranking each individual outcome and community factor such that a rank of 1 always indicates a better outcome or more resources. These ranks were then summed, with the individual outcome ranks weighted more heavily than the community factor ranks, to get an overall rank for each county. Stakeholders involved in the process were helpful in suggesting that some of the social and economic variables were possibly influencing the model with greater weight than needed. These suggestions moved the JVA team to experiment with adjustments to increase the profile of individual outcomes compared to the more general social and economic factors. Ten variables were ultimately included in the assessment model. Five of these variables captured outcomes such as HCV infection, overdose, and bloodborne infections. The remaining five represented community factors.

Data for their SVI approach were sourced from several different units and agencies. Overdose data came from the Bureau of Vital Statistics, while emergency department data came from the Bureau of Health Care Analysis and Data Dissemination. (Both of these units fall within the Missouri Department of Health and Senior Services.) The Missouri Department of Mental Health shared drug-related arrests and drug treatment data. The American Community Survey (ACS) was sourced for community factors.

The methodology and results were discussed and shared across six stakeholder meetings. In these meetings, variable weighting and variable changes were discussed and determined. For example, concerns about the potential for correlation and common rank results arose for some community factors like poverty rate and uninsured. The locations of these meetings corresponded with Missouri’s HIV Care Regions. Approximately 50 invitations were sent per meeting. A wide variety of attendees contributed to the process including mental health staff, police, coroners, non-profit staff, and even school representatives.

Maps, powerful visual tools, were developed and shared at the stakeholder meetings to help communicate the draft results of the assessment and ranking outcomes. Maps were provided with final outcomes as well as individual variables such as some of the community factors. ESRI software including ArcGIS [5] was used to publish maps for key variables. Certain variables were chosen or omitted when presenting data to avoid small number issues.

For outreach, Missouri’s team placed community-level calls with local public health agencies in vulnerable counties and used data to apply for action grants for HIV bloodborne work. The assessment work was also used for individual project evaluation in the state and, if appropriate staffing is made available, results will be used again next year for evaluation of certain project successes.

Missouri finished the assessment and has made the full report available on their website along with related resources. Additionally, for each county that scored as more vulnerable in at least one of their assessments, presentations were made via live webinars to provide targeted assistance. Dissemination efforts also included posters and outreach calls. Additional focus has been provided to rural counties which often fail to get as much attention, but where health outcomes can be critical. For example, Missouri recently had a significant HAV outbreak in a rural county area.

Missouri’s team found that, overall, the work took longer to complete than originally anticipated, and the team had to set limits to the project scope with only one year of funding available. It was also challenging for their team not to have funding available to hire more staff. Despite challenges, Missouri found that conducting stakeholder meetings in the middle of the process timeline was an effective and useful means of gathering information that was then used to draft content for the final report. For these meetings, facilitators were hired to collect written content and to capture stakeholder ideas from parties less willing to speak publicly. Missouri gathered written comments and obtained helpful input from stakeholders in this way.

Overall, success for Missouri included working closely with stakeholders and ultimately developing work that was well received and appreciated by other agencies and the public. The work increased team credibility with both internal agency groups and multiple work groups outside the agency. It was also a success for Missouri’s team to get final draft approval and additional funding for continued work on the model.